Two hours before the kickoff…

Albert Beaker: Hey, alien! Why are you wearing the PVCS jersey and not the STM jersey? Are you lost or something?

Albert: What? Since when do aliens get born in other cities? Oh, let me guess, because you’re a “bad” alien, so they moved you to a city where you belong, a place with so much drama, that they could actually make a soap about it.

Juan: What are you smart talking about, scientist kid?
(Zoe Curious walks by. Juan gets distracted and follows her…)

Albert: Scientist kid?! Is that the only thing you can think of, you… alien? Where the Fringe did that son of a boolprop go? Green rotten plant…

At the Spectators’ Stand

Bianca and Antonio Monty sit with each other on the STM side of the audience. Don Lothario (Juan Caliente’s “Uncle Don”) sits in the same row as them.

Don is unsure if Antonio is her brother or husband.
He only recalls to have seen this man before.
So Don decides not to try anything.

However, Bianca senses mild attraction bolts from Don.
It seems almost as if Don had since acquired an aura, which he did not seem to have during the 2015 match.

She takes another peek at Don, but reason gets the better of her. Bianca’s relationship with Kent is strong, and she’ll never exchange her life with Kent for anything else.

Other female members of the audience, both young and old, find themselves involuntarily staring at Don too… 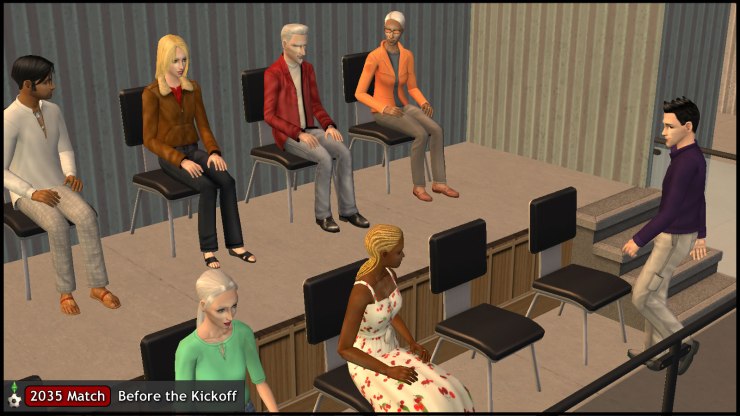 Nick Specter sits down two seats away from Ophelia Smith. If he HAS to sit next to someone, only his first cousin Ophelia will understand why he needs two seats for himself, and why that glass of water is not for drinking… 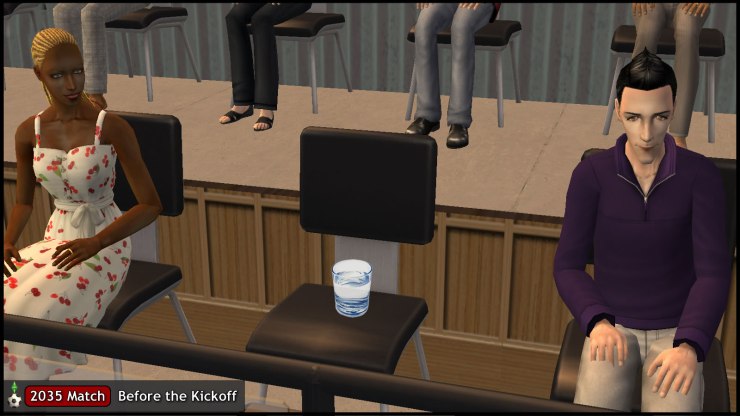 In the Dressing Room Tunnel…

Linesman Xu: Ivanov, I’ve got great news for you…

Xu: I just got a phone call from Roberts. He said that the Black Box‘s revised blueprints have been approved by Hyde, so the Black Box is scheduled to be rebuilt in early 2036…

Xu: Yeah, lets not mention that… By the way… Can you remember? What we did with the Black Box 20 years ago?

Ivanov: Haha, those were the days… When we used the Device in the Black Box to project that stadium illusion for the 2015 Match, and called it the “Llama Memorial Stadium”! Nobody knew, or felt the difference!

Xu: Yeah, with TVs real enough for Consort Capp to smash! (they both laugh) Also because there are too many stadiums with that same name…

Ivanov: Wish we could’ve done that trick again this year, but you know what happened…

Xu: Yes. But on the bright side, now we’ve built our own stadium! This time, the Hyde Dynamic Arena‘s gonna be here permanently, unlike the previous phantom of a stadium…

I mean, if we could build our previous Black Box in half a year, we knew this stadium would be a piece of cake…

Ivanov: Yeah it was easy, because our successful stadium projection experiment in 2015 confirmed that our scale model and blueprints are structurally feasible.

Referee Baptiste: Guys… let’s grab some hotdogs. The match will start in about 2 hours, and I’m pretty hungry. I’ll take the red car. Let’s race to the snack bar! Whoever arrives last shall pay!

Minutes before the kickoff…

Daniel: Good luck for the match.

Regan: Why not? He’s my brother.

Daniel: Your brother?!! I thought…

Regan: Yes, he’s a Monty now, because he married into their family. My father disowned him for that, but he’s still my brother. Remember, he played for their side, and became “Sim of the Match” 20 years ago? 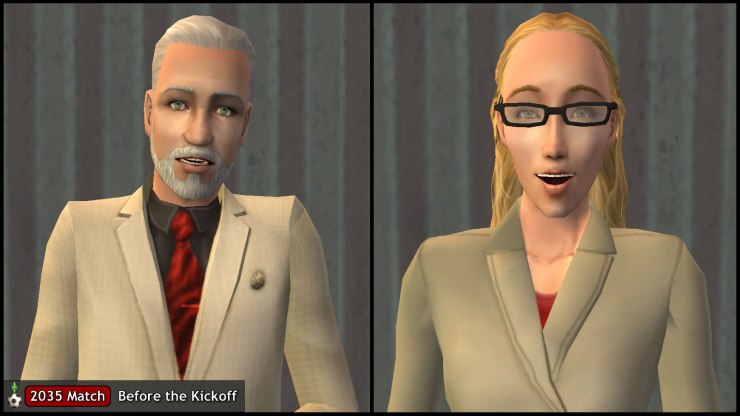 Grunt: The Capp lady didn’t seem to hate you.

Kent: I don’t hate her either. She’s my sister.

Grunt: I thought the Feud is still ongoing?

Kent: Yes, but we can choose if we want to be involved. Maybe she’s also bored with it.

On the pitch, Mercutio Monty has a quick chat with his niece, Claudia Monty.

Merc: Claudia, 20 years ago, your “1st Dad” and I were standing here in front of the goal post, talking about Tybalt Capp, before the match started.

Claudia: Yes, Uncle Merc. I miss him and my “1st Mom” very much. She was only subbed in during the 2nd Half, wasn’t she?

Merc: Yes, Juliette only came on after I was red-carded. (Referee Baptiste walks by) Be careful of this referee, Claudia. He’s very strict.

Claudia: Yes, I’ll be careful. (Merc nods) Wait… he looks very… young. I think he’s about 35 years old. Uncle Merc, was this referee 15 years old when he sent you off?

Merc: (stares at Baptiste) Yeah, he doesn’t seem to have aged a day. He looked exactly like this 20 years ago. Maybe he drank the Elixir of Life.

Claudia: (stares and nods) Are the 2 linesmen the same too?

Merc: (looks around) Yes, they are. Maybe I should take a good look at both of them too. 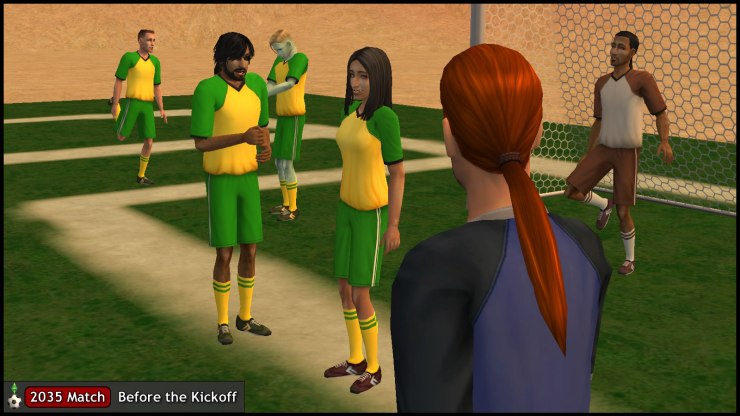 Shortcut to this page: http://is.gd/stmpvcs4