Albert Beaker: I’m only standing nearby!

Juan: No, you’re staring at me the whole time, why?

Albert: What? You’re angry? Got it cold under your green feet when I was intimidating you, alien?!

Isabel: Hey Albert, I noticed the drink machine has Sim Cola Light, your favorite! I have 5 simoleons to spare, it’s on me… come on.

(Zoe Curious is nearby. Juan walks to her.)

Juan: Hey cutie. Do you know what my jersey is made of? Boyfriend material.

Zoe: Eww, who do you think you are?

Juan: Your knight on a white horse!

Zoe: (runs off) Newton! This guy’s giving me the creeps with his lame pick-up lines.

Newton Curious: Boy, back off and leave my sister alone! 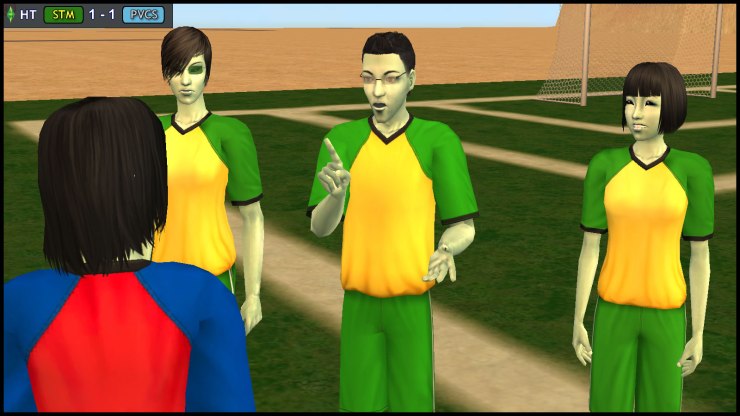 Juan: (thinking) Why are her brother and sister giving out the same “vibe” as the cute alien girl? It’s a nice, warm vibe, but not as strong as the one that comes from Uncle Don.

Maybe Uncle Don is half-alien too… and maybe he’s actually my father. But Mom and Aunt Nina also have alien ancestors, but I’ve never felt that “alien vibe” from them. I need to sit down… my head’s spinning…

Gen Grunt: Thanks for the heads-up, Kent. I’ll have a word with young Beaker before Half-Time is over.

Gen Grunt: Tank, good that you didn’t get any Yellow Cards in the 1st Half. Keep it up!

Gen Grunt: Team, we did a good job with 1-0! Pity we couldn’t take that score to the Dressing Room, but we aren’t losing! Still, you all did a great job!

Vivian, you’re playing really well! Everyone must take their opportunities like she does! I’m sure you all can, we’re a great team!

Kent: While that’s a good idea, we must not act selfishly. Pass the ball, create chances with teamwork, and we can go really far.

Horatio Monty: (thinking) I want to talk to Isabel Loner, but she isn’t here in the Dressing Room now. I think she’s still with her cousin. She stopped him from fighting with the alien dude.

She’s wise and kind… I’d better grab my next opportunity… I don’t want to lose contact with her.

Grunt: I’ve noticed that Tybalt Capp and Octavius Capp are a very good striking duo, so let’s decide who should mark them. To prevent holes in our defense, Chauncey, can you mark Octavius? Tybalt seems bad-tempered, so we need a quieter guy… Johnny, can you mark Tybalt?

Kent: Our attack and defense aren’t as strong as we hope. So everyone should try to stay close to midfield, but in your positions, and when we have possession of the ball.

Isabel Loner & Albert Beaker try to sneak in quietly, but they are immediately noticed by General Grunt.

Grunt: Albert Beaker, I want a word with you in private.

Grunt: I heard you attacked the goalie from the rival team. Why did you do that?

Albert: Why is that a problem? He’s an alien, and you hate them too… right?

Grunt: I did, sort of. But it almost cost me my job. So now I try to be a bit friendlier. But please be mature, OK?

Grunt: Very good. Make sure you DO it, instead of just SAYING it! 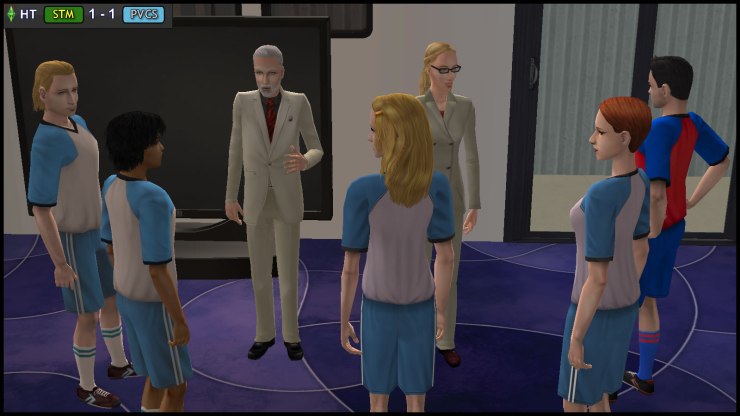 Daniel Pleasant: Great first half, people! 1-1 is a good scoreline!

Regan Capp: Yes, it was a wonderful first half! While the match was going on, I have an idea for a new tactic. I don’t know if Daniel agrees, but I thought of an effective system that’ll…

Dustin Broke: Demetrius, is your dad all right?

Demetrius Dreamer: Yes, he just called from the hospital. He’ll be fine.

Hal Capp: Hey, Beau. Do you know who we should mark? They have some dangerous players, but I can’t recall which players were the most dangerous.

Beau Broke: Umm… We should watch out for Tank Grunt, I think. Mainly because he’s a soldier, and a bit aggressive. If we could try and mark him a little more, we could prevent him from scoring. 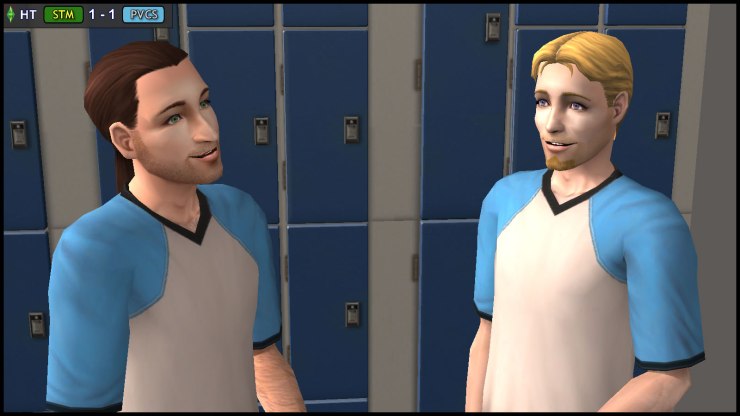 Daniel: Tank Grunt is their defensive anchor in midfield. If you can prevent him from getting the ball, the whole team becomes less dangerous.

Demetrius, can you mark Vivian Curious too? I noticed that she has very powerful long shots, and her accuracy can be compared with Robin Hood! So she must not get the ball. Is that clear?

Demetrius: Yes! How about her brother?

Daniel: Him? No, no, no. Newton Curious isn’t so dangerous compared with his sister. But, that doesn’t mean we shouldn’t mark him…

Daniel: Oh, almost forgot him! Everybody please pay attention to this! Chauncey Specter is very dangerous. He runs like The Flash and his passing accuracy…

Regan: What he means, is that Chauncey Specter should be marked by – if possible – 2 players?

Skip Jr Broke: That’s ridiculous, Missus Capp! There will be holes all over our defense! He may be fast and strong, but he is only ONE player. HOW would you think that’ll work?!

Regan: Firstly, calm down. Secondly, we could change our formation so that…

Kelly Summerdream: They work perfectly, Dad. All charged and perfectly hidden of course!

Puck: OK, that’s good .. Keep them hidden from everyone, especially the referee…

Daniel: No, Regan, that plan is too complicated for now. “Luciano Ronaldo”, can I speak to you privately? …

Daniel: Why are you doing those unnecessary tricks? You play football for a living, yet you put yourself to shame with those blunders! I can make a video compilation of your bloopers in the 1st Half! C’mon Lucy!

Parker Pleasant: Dad, when will I get onto the field? I mean, I’m the best player, right?

Daniel: Not the best one, maybe one of the best. Maybe early in the second half. Please don’t embarrass me, alright?

Parker: Got it, Dad! I’ll make you proud!

Ariel Capp: OK Aunt Regan, it’s clear to me. I’ll try to do my best with the new tactic…

Tybalt Capp: Octavius, I want you to let me be the penalty taker.

Octavius: No way! You missed the one 20 years ago, causing Grandpa to be fined for vandalism. There’s no way they’ll take any risks with you.

Tybalt: You little punk! Everyone knows I’m a better penalty taker than you!

Just as Tybalt is about to strike Octavius…

Regan: (shielding her son) Tybalt!! You’re lucky the referee didn’t see this, or you’ll be the first player to be Red-Carded at Half-Time. Then you can stay here for the rest of the match, while your team suffers outside with 10 players.

Octavius: Mom!! He wants to force me out of taking the penalties.

Regan: Tybalt, give the younger players a chance.

Tybalt: He’s not just any “younger player”, but your son! Fringin’ favoritism…

Regan: Tybalt, is it you, or me, who’s in charge of this team? (Tybalt is silent) I say Octavius takes the penalties.

Tybalt: I guarantee you, I’ll put the ball past that Monty scum, and we’ll show them who’s boss!

Regan: Tybalt, this isn’t only about you, but the whole team.

Tybalt: Aunt Regan, I’m sorry I tried to hit your precious son. But I really want to make up for my past miss. You know I want so much to be a Capp hero… to make everyone proud.

Regan: OK… here’s a compromise. The first penalty is taken by Octavius, and the second by Tybalt.

Tybalt: But what if there’s no second penalty?

Regan: It’s better than me saying that you can’t take any.

Tybalt: (grudgingly) All right. Thank YOU, Aunt Regan. (to Octavius, threateningly) You better not miss, you little octopus, or else…

Octavius rolls his eyes, and walks off to more pleasant company.

Octavius: (thinking) How dare he mock my username like this…?!! I like my gamer tag, but I hate how he says it in such a patronizing way! Wait… I don’t recall ever telling him that I’m “Octopus2018″… but it’s not really so difficult to guess anyway…

Regan walks out of the Dressing Room… 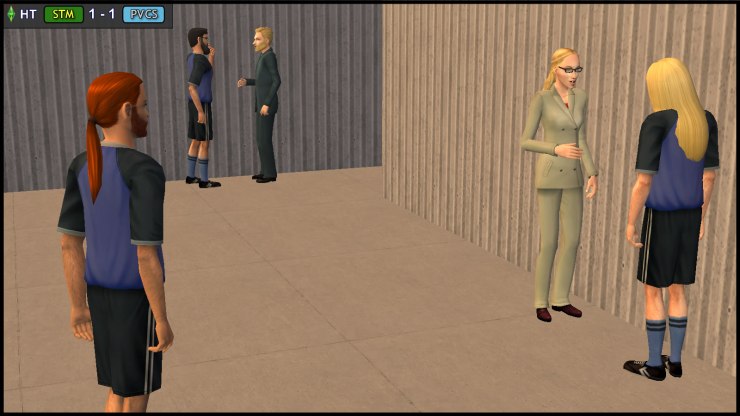 After his restroom break, Referee Baptiste looks around for his Linesmen for a quick briefing. Instead, he sees both Ivanov and Xu talking in low tones, to the Capp and Monty managers, respectively, on different sides of the tunnel.

Regan: (to Ivanov) If any of the Veronaville natives get sent off in the 2nd Half… (spoilers removed)…

Ivanov: That shouldn’t be a problem.

Ivanov: I see. I’ll let you know before the 2nd Half kicks off.

(Regan gives Ivanov a thumbs-up, and returns to the PVCS Dressing Room)

Kent: (hands a scrap of paper to Xu) After the full-time whistle… (spoilers removed)…

Xu: (reads the note) I’m not sure if the Referee will approve of this.

Xu: OK, I’ll try. But I can’t guarantee anything.

Kent: Thank you so much. (Kent returns to the STM Dressing Room)

After both managers take their leave…

Baptiste: No foul play or match fixing, I hope?

The 2nd Half kicks off in 5 minutes.

Which team gets the first Red Card, if any, and why?
Will the strategies and promises made during HT work out well for both teams?

Shortcut to this page: http://is.gd/stmpvcs6