Daniel Pleasant is displeased. He took off the goalscorer Ariel Capp because she had a Yellow Card. Now his son, Parker, has one too, just 5 minutes after he came on…

67″ CORNER KICK (PVCS): Taken by Hermia Summerdream. Kelly Summerdream accidentally passed back, and the ball went over the sideline.

Pity, Kelly was playing so well, but her form seems to be dropping…

Regan Capp: Daniel, I can’t take any more risks with Kelly… (yells at the pitch) Hal is the new Free Kick taker!

70″ SHOTS ON TARGET (STM): Great ball on goal from Newton Curious! But Juan Caliente punches it away…

Wait! It rebounds back to Newton, who does a bicycle kick from a distance, Simbrahimovic style! Juan Caliente tips it over! Corner kick! 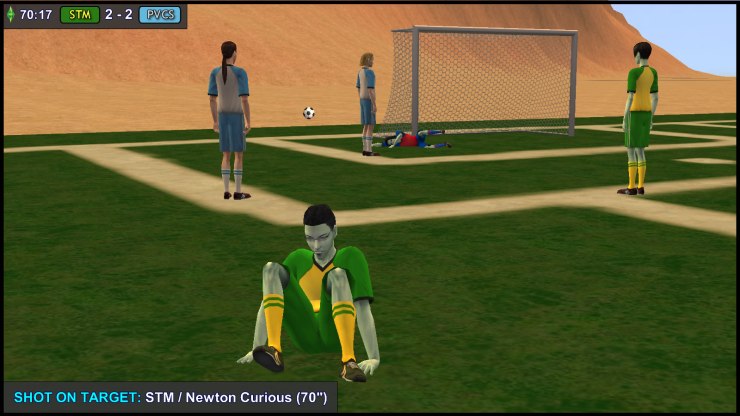 Regan Capp motions to Hermia Summerdream, who happened to be nearest to the sideline: “Mark Newton Curious,” she instructs her. 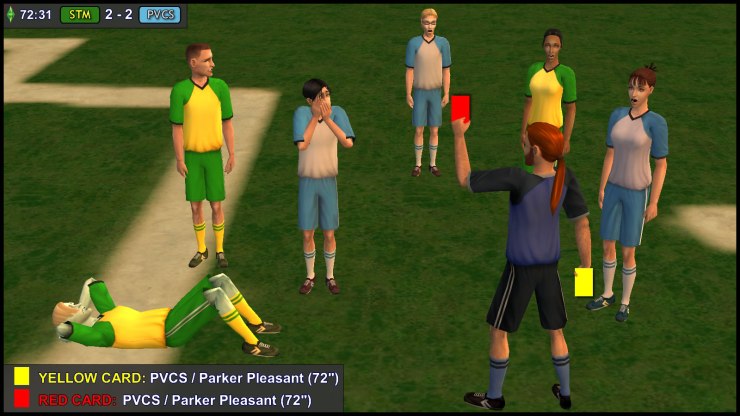 Daniel Pleasant explodes. He suddenly realizes his calmness in the previous match is due to none of his kids being outfield. He thinks he might have had a heart attack if Angela and Lilith had been outfield together 20 years ago.

72″ INJURY (STM): Johnny Smith is in great pain. His ankle hurts, but his face hurts more.

Tank Grunt remembers how he swore to break Johnny’s nose when they fought as teenagers. But now, he wonders if Johnny’s nose is ok.

Daniel is horrified. Johnny is one of his most promising players in Simley Town, and it had to be his own son to injure poor Johnny. And next week are the play-offs for promotion (for Simley Town to ascend to a more prestigious league)! Parker will be in deep trouble tonight… 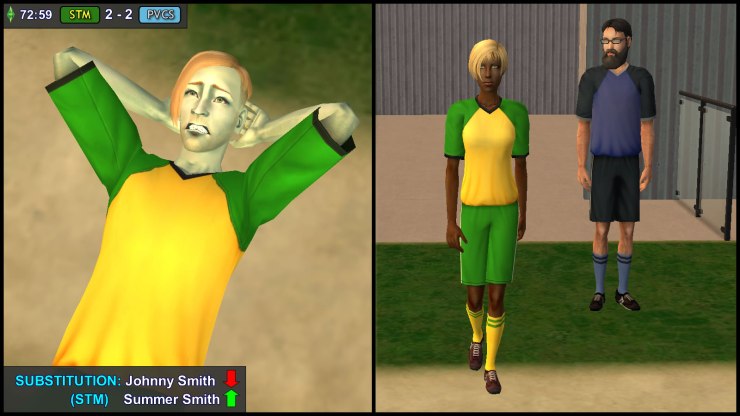 74″ Ouch! The ball went smack into Lucy Burb‘s face.
Must have hurt terribly.

Meanwhile, Juan Caliente is surprised to feel NO “alien vibe” from Summer Smith, even though she was within close range to him. Isn’t she the daughter of half-alien Johnny Smith, but with a human skintone instead? 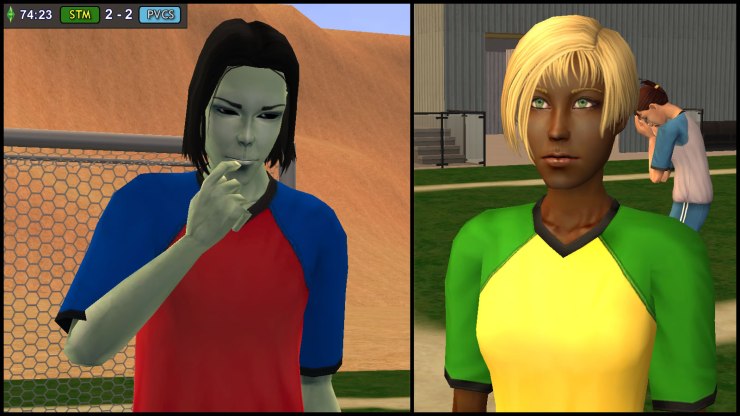 With Johnny Smith subbed off, Juan is thinking of asking Newton Curious after the match. But he’s worried that all the Curious Cousins probably dislike him already, for flirting with Zoe during the Half-Time break…

Juan Caliente didn’t have to tell the referee that, as the referee saw it for himself. This causes Albert and Juan to glare at each other again. 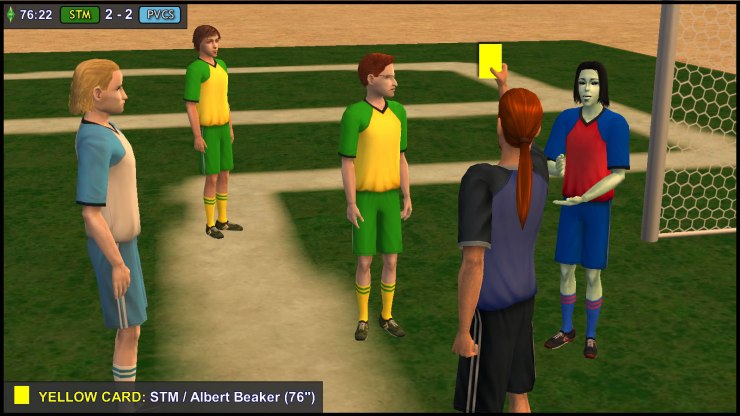 Kent: It’s a pity that some players are too aggressive with each other, but yeah, we can’t do much about that. Your side is run by a professional football coach and a sports shop owner, while mine has a scientist and a retired army general…

Regan: Haha, yeah. Three of us don’t quite have the typical qualifications for this role… 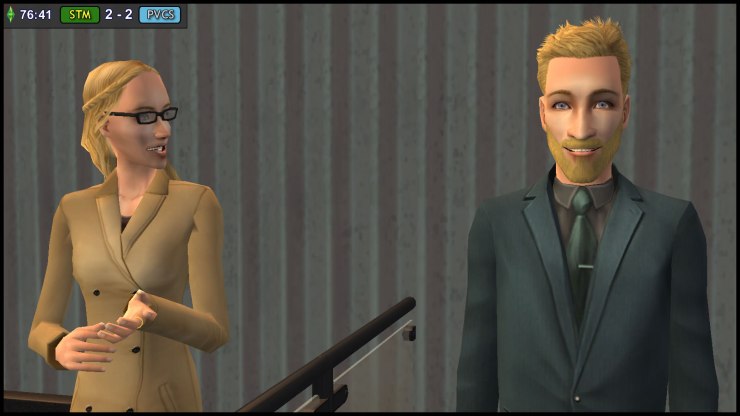 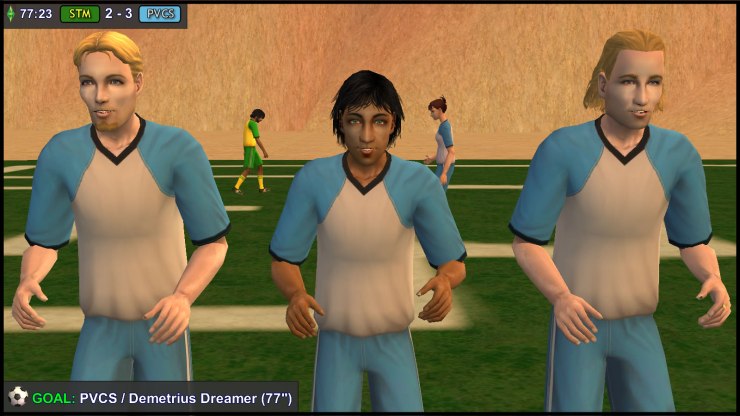 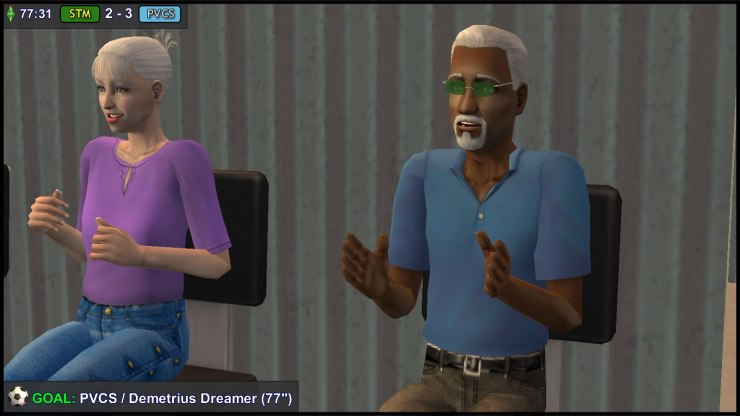 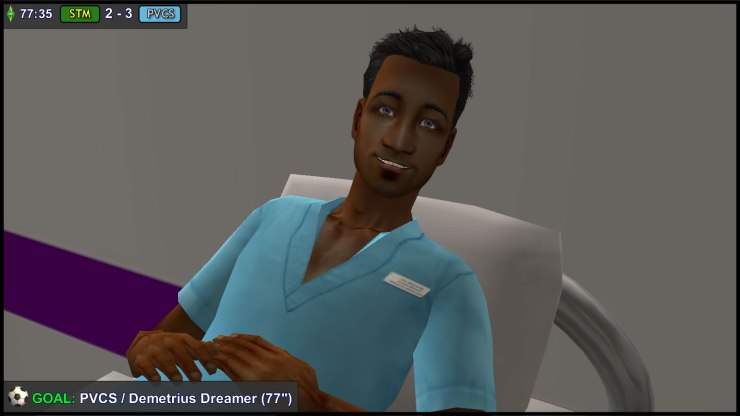 AH: Seems like an unplanned assist. She probably intended to shoot, but ended up lobbing the ball instead… she looks upset with herself.

80″ SHOT OFF TARGET (PVCS): Beau Broke intercepts a pass from Bea Monty, and breaks through the STM defense! He shoots, but puts it too high! Great opportunity.

AH: Wait, isn’t he the boyfriend of Lucy Burb?

S2P: Yes. Seems Beau is even better than Lucy! Don’t tell her I said that!

83″ SHOT ON TARGET (PVCS): Demetrius Dreamer for his second? Yeah??

No!!!! Ben Monty with his amazing reflexes!

87″ (STM): Goal kick by Ben Monty, which ends up at Vivian Curious. She passes it to Horatio Monty. He sprints with the ball, passes it to Bea Monty, who passes it back!

Juan Caliente is confused! Open goal! Horatio must not miss this one!!!!!

Tybalt Capp: (to Octavius) Now’s your chance… beat up that Monty loser!

Octavius Capp: (thinking) Are you crazy? I don’t want to be red-carded!

After a brief silence…

Tybalt: Why aren’t you saying anything? What’s wrong with you? You’re a coward. You’re a loser. You’re worse than a Monty. You’re not fit to be a Capp! (walks off) 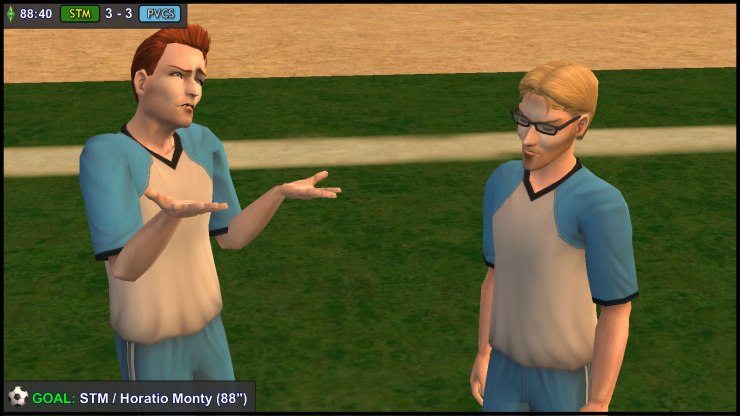 Octavius: (thinking) Horatio has never hurt me. Why should I hit him? Is Tybalt trying to get me into trouble? There must be something wrong with Aunt Goneril and Uncle Albany, if they think he’s a good role model…

90″: PVCS CORNER: Juan Caliente tries to be a hero, by coming all the way up to attempt a header.

When the ball comes in, he and Albert Beaker have a fair clash, but the ball ends up with Mercutio Monty, who clears it halfway across the field.

Daniel Pleasant yells, “JUAN, GO BACK NOW!!!”
But Juan is taking his own sweet time to get up.

Albert is already up, with his eyes on the referee.
The moment the referee’s head is turned…

Linesman Xu: (through the earpiece) “Baptiste!! Stop play now! Foul behind you!” 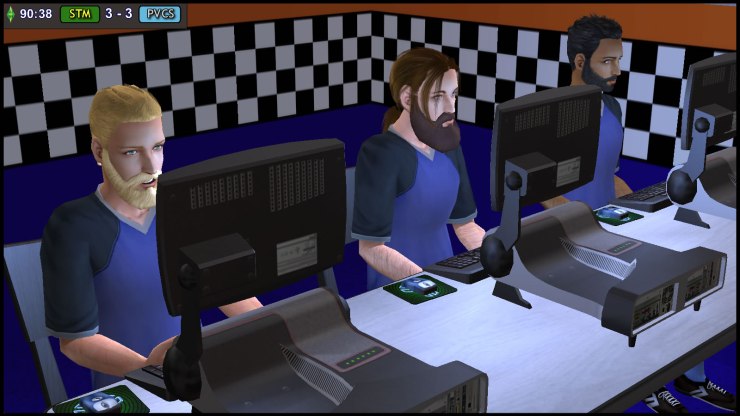 Referee Baptiste turns around. Indeed, the PVCS goalkeeper is on the ground, inside the penalty box, clutching his shoulder in pain. He blows the whistle.

Baptiste: (through the earpiece) What did you see, Xu?

Ivanov: Yes, I saw that too.

The PVCS players are saying exactly the same thing as the linesmen and the VAR.

The STM players who saw it are too shocked to comment. 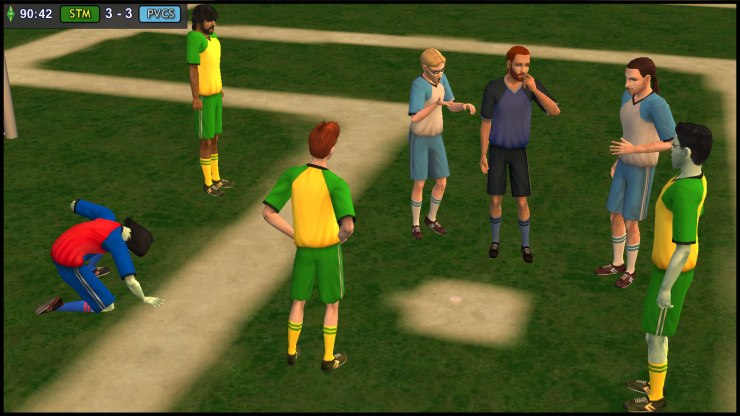 Albert denies any involvement.
Juan gets up, and shows the bite marks to the referee.
Juan swears, and makes a rude gesture at Albert.

As the foul happened in the penalty box, the Referee awards a second penalty kick to PVCS.

Loki Beaker: (cold & rational) The Boolprop Potion we gave him was too concentrated…

Circe Beaker: (ruefully) We should’ve given him less! He takes after both of us too much.

On the STM bench:

Grunt: Fringin’ boolprop. We should’ve subbed off that Beaker imp 25 minutes ago!

Kent: Cool it, General. Both our substitutions were forced, anyway. We can’t let Isabel Loner and Johnny Smith continue to limp out there, can we? It’s correct for us to ration our third substitution.

Grunt: That no good son of a boolprop…

Kent: Grunt, please. You wanna be out here at the final whistle, not in the dressing room. If we survive this penalty, that’s when we’ll use our third sub.

91″: Albert Beaker walks slowly off the pitch, in tears.

S2P: Looks like Tybalt Capp is preparing to take this penalty.

AH: Strange, I remember he missed the one in 2015, and Octavius Capp already scored this match. We’ll see…

General Grunt hopes that Ben Monty can repeat the save that Grunt made 20 years ago. In the audience, Antonio and Bianca Monty yell, “Come on, Ben!! You can do it!!”

The ball hits the crossbar, and bounces off the pitch.

The PVCS fans are stunned into silence, but the STM supporters break out into cheers. Bea Monty congratulates her goalkeeper brother with a hug.

Octavius glares at his mother. Regan looks at him sternly.

Tybalt’s pride is completely broken, and bursts into tears. He allows his sister, Hermia, to console him, but brushes aside everyone else. His aspiration meter crashed, and he officially hates Octavius. 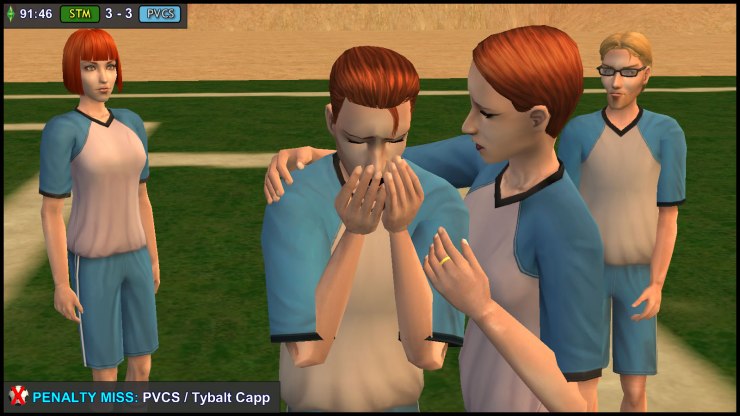 Albert is halfway through the tunnel, and his mourning suddenly changes into a show of jubilation, before vanishing into the Dressing Room.

Claudia Monty: (playfully) Hey Albert, how does alien taste like? 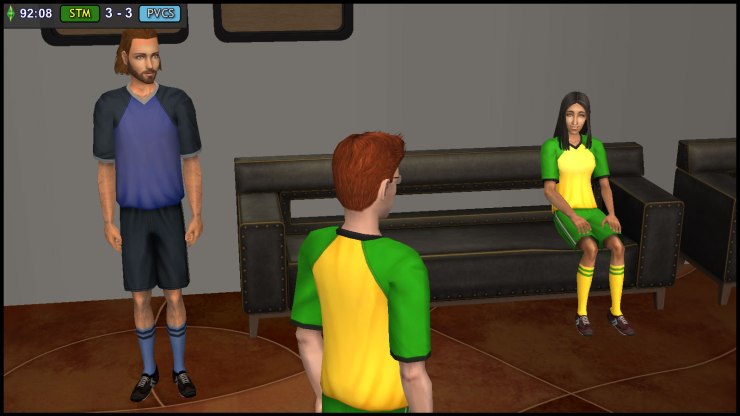 As they pass each other the sidelines, Zoe says, “Nice bicycle kick, bro.” Newton smiles and nods in acknowledgement. 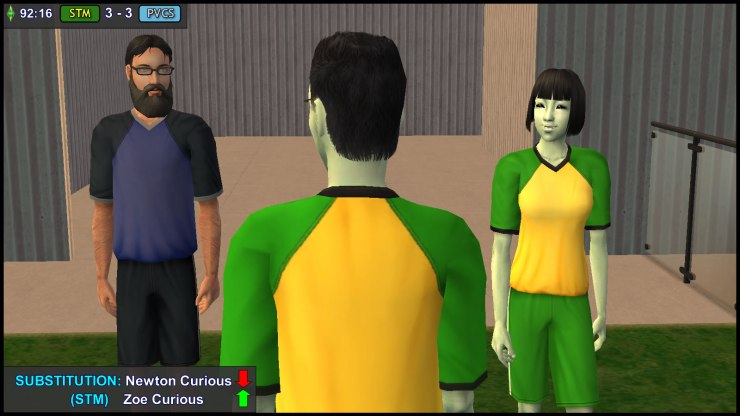 Sim of the Match: Ben Monty, for saving a very high percentage of the shots on target.

The whistle may be blown for the end of the 2nd Half, but the post-match drama is NOT over.

What mysterious conversations happened in the tunnel during the Half-Time Break? Are there scores that need to be settled?

Shortcut to this page: http://is.gd/stmpvcs7b