Tybalt Capp is bound, hand and foot.
His football boots were confiscated as evidence.

Mercutio Monty, who wisely stood far away from Tybalt, tries his best to suppress a smirk.

RM Sepp Rossi is stretchered off to the Injury Room.

Antonio Monty: I think it’s a good idea. As we can see over there, the Feud hurts innocent sims. It should stop now.

Cornwall Capp: That’s true. We should let it go.

Regan Capp: Of course, we shouldn’t expect us to suddenly become good friends with each other. Big changes like this cannot happen overnight. But we should all do our part to fix it.

Bianca, Antonio and Cornwall clap their hands.
The rest of Veronaville natives follow suit — except Goneril, Albany and Tybalt.
Mercutio is somewhat halfhearted, but he claps anyway. 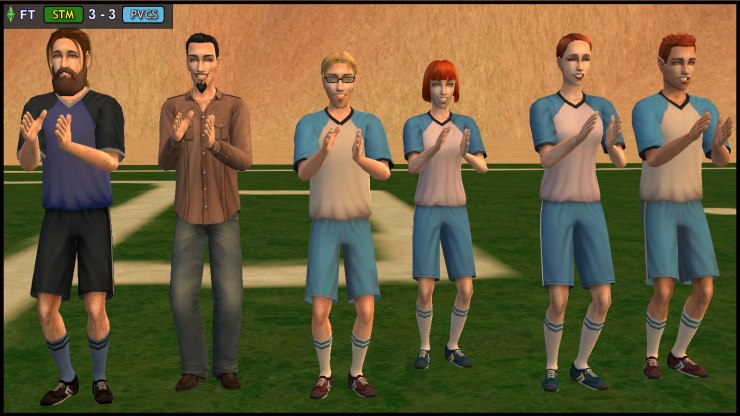 Regan and Kent hug each other in an extended tearful embrace. 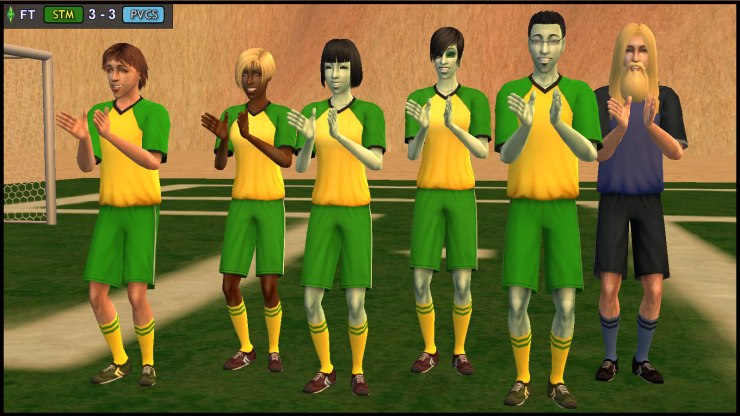 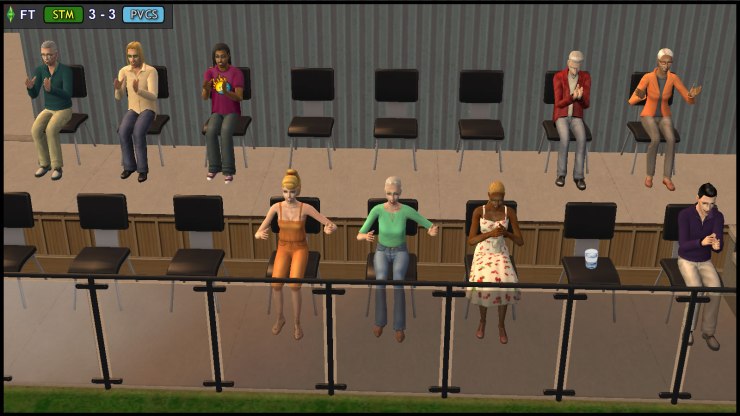 As General Grunt claps, he is somewhat sad, as he regrets not having a proper reconciliation with PT9 before he died. Maybe he can make up for that by treating his future daughter-in-law, Jill Smith (PT9’s daughter), much better. 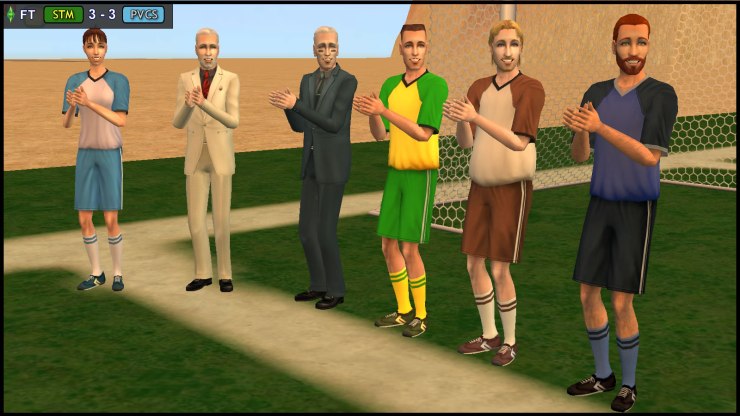 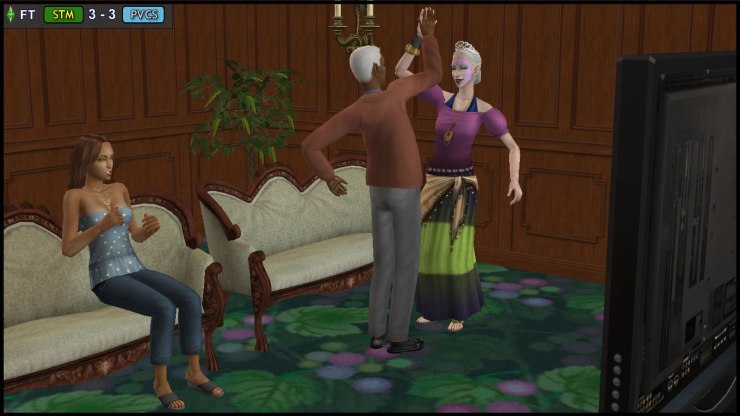 Back in the stadium…

Bianca Monty: (to Cornwall) Would you, Regan and Octavius like to come over to our house for dinner tomorrow?

Cornwall: (surprised) Oh… ok…. I suppose we will. We’ll confirm the time with you later.

Horatio Monty smiles. This arrangement means he has time this evening to visit Isabel Loner in the hospital. Hopefully, she’s well enough to have a nice chat by her bedside. Horatio wonders if she’ll grow to like him enough to consider becoming the next “Isabel Monty” in the years to come… 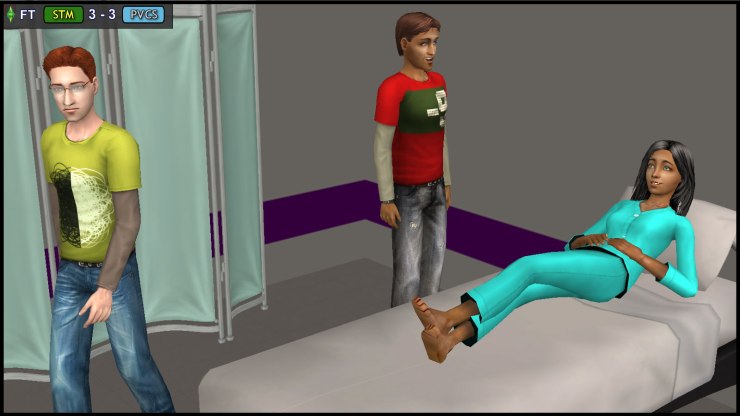 The VFL Simburg scouts make their way onto the pitch. With all smiles, they approach the Sim of the Match, STM Goalkeeper Ben Monty, chat with him briefly, and hand him a letter. As Ben opens it, his sister Bea and father Antonio watch over his shoulder. As they peruse the letter, they all look pleasantly surprised.

Lucy Burb watches intently. Will they be approaching any PVCS players too?

The next player approached by the scouts is Chauncey Specter. As he is standing nearby, Lucy can hear that Chauncey is 14, enjoys playing football very much, but has not thought about joining the school team yet. Lucy can also hear the scouts asking if Chauncey would like to train in a “prestigious football youth academy” for a “bright future”. 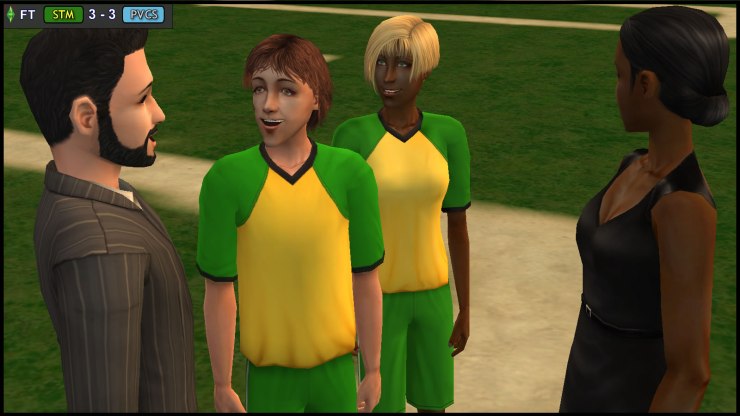 For a moment, Lucy imagines that Chauncey’s wide smile is her own. Her mind takes a trip back to when she was 14, on the home pitch of Simley Town, with coach Uncle Daniel waking her up to the reality of her training sessions — out of her teenage daydreams of becoming a footballer in a prestigious club…

Lucy’s jaw drops when she sees the third player approached by the scouts on the pitch. This player too, seems just as surprised to be approached.

But that surprise on LB7’s part soon changes to great disappointment… and a flood of tears, when the scouts walk away from the pitch after that… 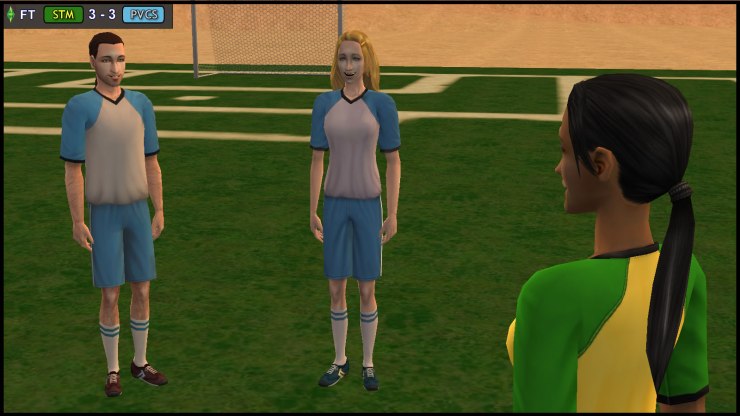 Ariel: Hal, are you…

Hal: No, nothing, nobody.

Goneril: (to Hal) Why must you choose a Monty girl? Do you want to be disowned?

Goneril: (shocked, upset) Ariel!! How could you…

Albany: Goneril, that’s enough. You may not want your children, but I want them, ALL of them. Stop this nonsense, or I’ll leave too.

Goneril: (shocked) But they are disobedient…

Albany: We’ve already lost Mona, and I can’t lose any more of them. My Aspiration meter has been red for too long…

(to Hal & Ariel) Kids, let’s go visit Miranda after she gives birth. Maybe she misses her siblings, and her dear old father too… 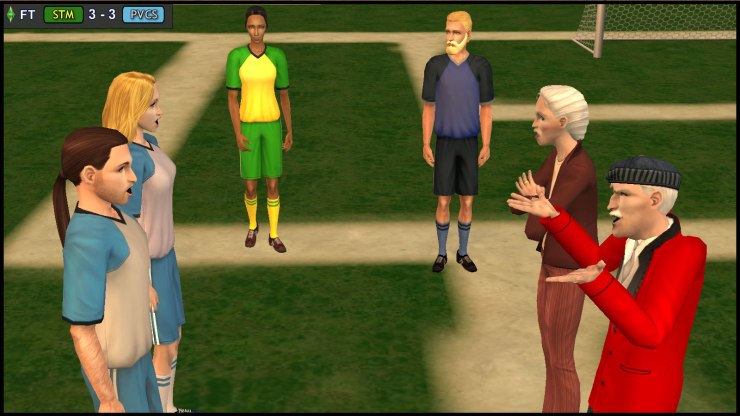 A heavily-pregnant Miranda is watching the match on TV in the hospital. She saw Aunt Regan and Uncle Kent embracing, so she has a rough idea that the Feud is over.

She also saw this conversation between her immediate family members, but couldn’t hear anything, so she’s not sure how to interpret what she saw.

Goneril: Albany, I’ve been raised with the Feud, so I can’t just let go of it at such short notice. I’m not ready to see Miranda YET. Give me time. Maybe she’s still angry with me anyway.

Ariel: Mom, if she is, we’ll persuade her to forgive you.

Hal: Maybe she needs time too.

Goneril: (strained) OK, son. Go see whoever you like. Even the Monty girl, if you must. (thinking) It’s so difficult to let it go…

RM Roberts approaches Mercutio Monty with some news.
Mercutio thanks him, then quickly tells Antonio he needs to leave quickly, and why. Antonio nods, and Mercutio starts running.

Albany: How far is my daughter in her pregnancy?

Merc: I’m in a hurry now. She just went into labor.

Albany: Oh! Can I come with you now?

Merc: You can drive behind my truck, but I’m not sure if it’s a good time for her to see you yet.

Albany: No problem. I’ll wait downstairs at the hospital. I won’t come up until you tell me she’s ready. It’s more important that she and the baby are safe.

Merc: Sure. See you at the hospital.

– How will “Uncle Don” Lothario react to Juan Caliente and Johnny Smith’s questions?
– Who is the third player approached by the VFL Simburg scouts?
– What will become of Goneril and Tybalt Capp when they return home to post-Feud Veronaville?

Shortcut to this page: http://is.gd/stmpvcs8b