With the Veronaville drama seemingly over, the Pleasantview & Strangetown natives get up to leave. Don Lothario turns, and sees Juan Caliente with an injured STM player….

Don: Hey Juan! Are you alright? How are your bite marks?

Don: Oh, and one reminder… if you see that boy again, just ignore him. OK?

Don: (to Johnny) Mister, are you alright?

Johnny Smith: Yes I’m fine, thanks. I took a couple of painkillers which should reduce the pain a bit. But I still need an operation.

Don: Ouch! I wish you the best of luck! I also broke my leg while I was on the swing as a child. It really hurt. So I can feel your pain…

Ophelia passes by, and detects that Johnny is busy helping a young alien. She quietly nods to Johnny, and he acknowledges by nodding back. Ophelia goes off to meet their daughter.

Johnny: Actually, your nephew came to me and he told me that he felt a vibe from you, and that it is stronger than my vibe… which left him with questions.

Don: Can… Right now? I don’t really… They came… And it was just in a flash of a second… Juan… Please… not now.

Juan: What do you mean? You’re speaking gibberish!

Juan: I beg your pardon?

Johnny: Sir, how is it that I didn’t feel a vibe from you during the previous match? In 2015?

Don: Well, I’ll explain everything. A couple of days after the match, I was abducted by aliens. But they didn’t abduct me to impregnate me, but because I’m a cassanova…

Don: They offered me a deal to turn me into “Colony Don”, a special Colony Drone, with alien DNA and the ability to shapeshift into my human form anytime I wish.

They will make me attractive to every woman I want to Woohoo with, but all my offspring will get the alien skintone.

I didn’t really care, because I’m not the “family” type, but the “romance” type. They had finished with Strangetown, because it has enough aliens. So they were planning to move on to Pleasantview and other suburbs from Pleasantview, such as Bluewater Village, you know, the shopping district?

Don: Well, in the other neighborhoods and Pleasantview suburbs/districts there aren’t many science geeks, so not many people have telescopes.

The aliens needed someone to do it the “traditional human way”… I was the “chosen one”, as they called it. 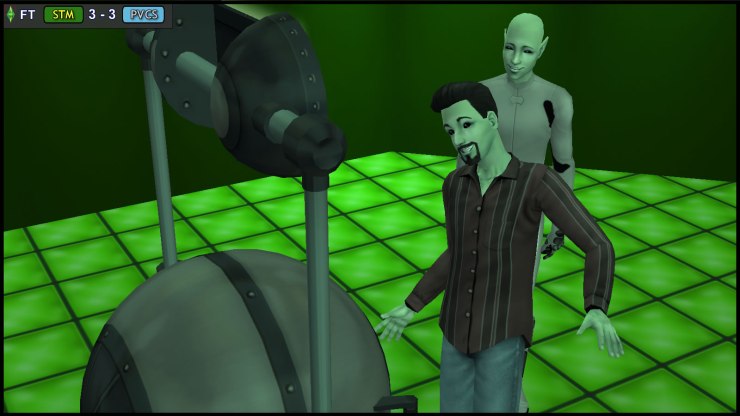 When I was away from Pleasantview for my medical humanitarian work, after working hours, I impregnated women I met at nightclubs. So I have at least one child in every locale you can imagine, from Belladonna Cove to Champs Les Sims to Takemizu Village. Some women are even pregnant at this time.

Juan: So you are…

Johnny: (thinking) I knew it… his vibe is exactly like my late father’s… how I miss my Dad.

Juan: But why are you so close to us?

Don: Your mother and aunt, well, we are close friends. Before you were born, we had a hot-tub party at my condo almost every evening. Over the years, I learnt to love you as a son.

Juan: Why didn’t you tell us?

Don: Your mother would’ve been angry if she found out I gave her the alien baby that made Mr Goth divorce her, making her lose his fortune.

Don: Yeah, him… But Juan, can you forgive me? And will you still look at me the same way as before this conversation?

Juan: You’ll always be my father… I love you…

Juan: No, I’m not angry with you. I’m happy to know who my Dad is at last.

Don: Juan, my son… this is our secret. Please remember to continue calling me “Uncle Don” in front of everyone else, especially your Mom and Aunt.

Hermia: Tybalt, you injured a man who DIDN’T “insult the memory of our grandpa”. I have bad news: That Racing Man, Sepp Rossi, is the son of Constanzo Rossi, the Mayor of Monte Vista a long time ago.

Yes, Old Mayor Rossi is still alive, because he didn’t have a bitter Feud to cut short his elder years. You better hope the Rossi family doesn’t press charges.

Tybalt: That’s not my concern. I just don’t like the Feud to end!!

Hermia: Tybalt, you like the Feud because you like to fight. I think Grandpa is more disappointed with you now, than with the Feud ending. Just let it go, Tybalt, and be a better man than your grandfather.

Tybalt: Shut up, Hermia. Go back to your tree-hugging family.

The following week, the Summerdreams threw a huge party to celebrate the end of the Feud.

Everyone attended, except Tybalt and Goneril.

Claudia Monty apologizes to Ariel Capp for the headbutt, and Ariel apologizes for swearing at her. Claudia innocently asks why Goneril isn’t at the party, so Ariel clarifies that Goneril “needs time”.

Regan Capp’s family had lunch with Kent Monty’s family the afternoon after the match.

Octopus2018 was pleased to find out that his online friend, DrRatio, is actually his first cousin. The two had occasionally chatted online, while playing the games “Rune City” and “GTR ’33”.

Regan and Kent are delighted that their children are bonding in a similar way as they used to as siblings — their only regret being that they didn’t attempt to end the Feud earlier.

Octavius and Horatio made further plans to game online together. Now that Claudia has finally decided on her permanent username, Cmo22 may join in the fun too…

From 2036 onwards, the three of them can technically, play online together at the same time, since Claudia Monty will have full access to her own computer from then on — away from the household of Bianca, Kent and Horatio.

Claudia has to move out because she accepted the football scholarship offered by VFL Simburg. She was shocked to be the third player the scouts approached on the pitch, for she did not expect them to have a good impression of her, as a result of her headbutt and Red Card. 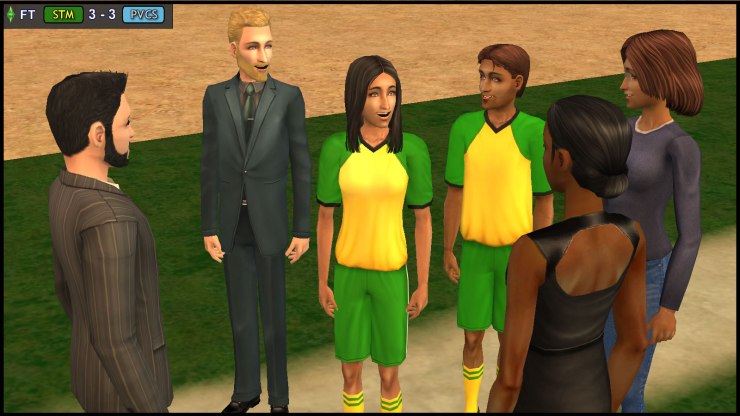 The Montys are pleasantly surprised that the scouts chose to look beyond Claudia’s one impulsive act.

The scouts were particularly impressed with Claudia’s 100% passing accuracy — her ability to ensure that the ball reaches ANY player she wishes to pass it to — for they found out that it was her beloved brother who was at the receiving end of most of her ambitious passes.

Ben Monty, on the other hand, declined the offer from VFL Simburg, because his heart is in the Monty Restaurant… 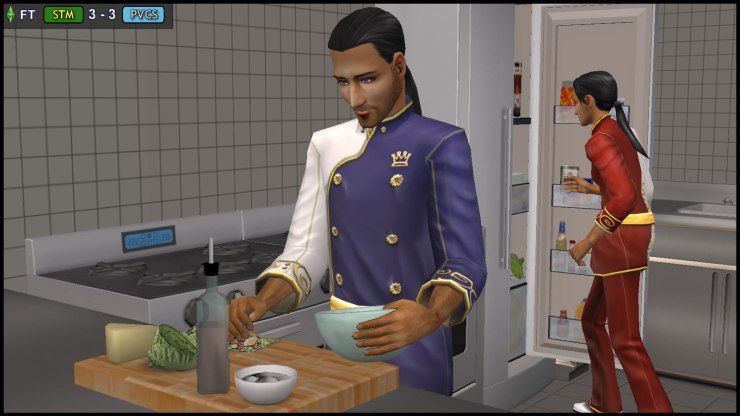 So Claudia will have her own room in a three-room apartment in Simburg.

The other two rooms are occupied by Chauncey Specter and his father Nick. The Specters are selling their Strangetown home to follow Chauncey’s dreams. Like the Montys, the Specters do not know anyone living in Simburg well enough, and are pleased to host their Team STM acquaintance Claudia Monty.

Horatio will finally have the living room computer all to himself, but he’ll miss Claudia very much. On the bright side, the siblings can now be online at the same time, and stay in touch.

Luckily for Tybalt, RM Rossi recovered quickly, so no charges were pressed.

Unluckily for Tybalt, his Aspiration meter remained Red from the time he missed the penalty.

Not even Mercutio Monty would humor him with a fight, even when Tybalt provoked him with all the usual triggers.
His wish to be the “Capp patriarch” and Feud mastermind was going down the drain…

One day, Tybalt suddenly vanished from Veronaville. He didn’t even tell Hermia where he went.

He was rumored to be seen in the alleyways of Belladonna Cove, intimidating and beating up innocent sims, and living off the money he stole from them. After that, he was never seen again.

Goneril eventually went to see Miranda, and carried her first grandchild(#) — the first Veronaville native to be born in the post-Feud era.

It was awkward when she finally spoke to Kent for the first time in 20 years, as she couldn’t look at him in the eye most of the time. While she and Kent have never really gotten along, at least there were no ill words spoken between them this time.

Goneril also secretly wishes that Hal wouldn’t marry Bea Monty, but finally accepts that some choices are simply not hers to make.

Time heals most wounds, if sims allow it to.
Former enemies may never gain enough trust to become Best Friends, but it is good enough for both parties to treat each other cordially and respectfully, so that fair play may reign on and off the pitch.

(#) Mercutio & Miranda’s baby’s name/gender are deliberately left ambiguous, so I can be flexible IF I want to write a story about him/her in future.

How did Tybalt Capp evolve from the 2015 Teen to the 2035 Adult?
What REALLY happened to Claudia Monty’s birth parents, Romeo & Juliette?

Shortcut to this page: http://is.gd/stmpvcs8c