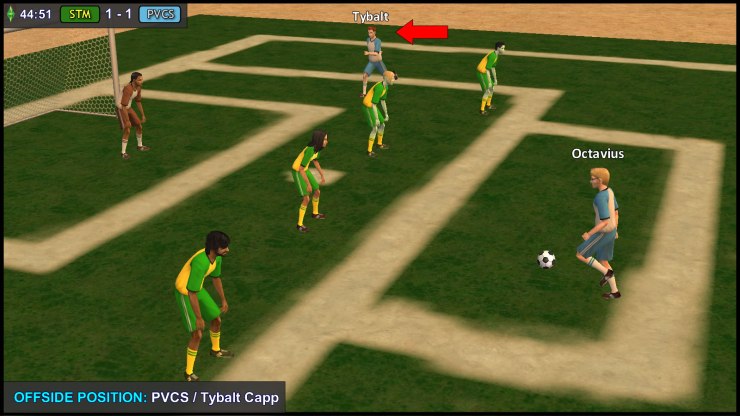 PVCS’ Tybalt is in an offside position, as he is in between the (last defender of STM) and the (STM goalkeeper)**.

However, he is NOT FLAGGED offside (by the linesmen) at this time, because he does not have the ball.

If Tybalt remains in this position, and receives the ball from Octavius, Tybalt will be FLAGGED offside by the linesmen.

In other words, a player “in an offside position” will only “be flagged offside” (by the linesmen) if they have the ball.

One does not get a Card for being flagged offside, but a Free Kick is awarded to the opposing team.

** The official definition of “offside” is “being in the attacking half of the field, ahead of the ball, and having fewer than two defenders nearer the goal line, at the moment the ball is played.”

So the attacking player is “offside” when there are 0 or 1 player(s) from the defending team nearer the goal line, when the ball is being played.

These “defending player(s) nearest to the goal line” may NOT necessarily be, or include, the defending team’s goalkeeper.

Next Extra: [PVCS vs STM Sims Characters Recreated in FIFA 17]