AldoHyde wrote this scientific conspiracy and psychological drama for a 13+ audience.

This show does not feature conventionally attractive (or “pretty”) sims. Instead, it thrives on a strong script and thought-provoking dialogue.

Expect unconventional portrayals of situations and characters, experimental storytelling methods, and stories that are NOT confined to typical gameplay limitations. [Introduction to STM: For Non-Sims Players]

[For Sims players] Series Synopsis: Disaster strikes Veronaville, leaving only a pair of adult siblings and several children. The Monty-Capp family feud seems to have ended, but new and more sinister problems might be lurking in the shadows of Strangetown & (what remains of) Veronaville.

This STM Site is also the home of other tales of premade sims, set in related STM Universes.

Of course, let’s not forget the Main STM Universe, which starts and ends with the Veronaville Disaster:

… as well as other quizzes, polls and game guides.

END_OF_DOCUMENT_TOKEN_TO_BE_REPLACED

It is quite clear that I do not play every household in Strangetown and Veronaville equally. Instead, I pick and choose the characters who inspire me, and write a story focused on them.

STM is a gray world, shaded with Fringe Green and Hyde Blue. Characters are involved in END_OF_DOCUMENT_TOKEN_TO_BE_REPLACED 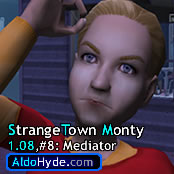 Bianca Monty’s presence in Strangetown causes different parts of the neighborhood to become… connected. Other Strangetown residents are less careful…

Bianca Monty braces herself for Antonio’s fate, while Loki & Circe Beaker run out of time & options. Some crimes are destined to remain unpunished this dark night in Strangetown. 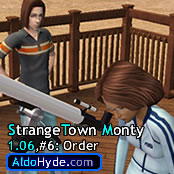 Bianca Monty visits the Grunt household, & observes the effects of Lyla Grunt’s disappearance. But there seems to be another reason for her visit.