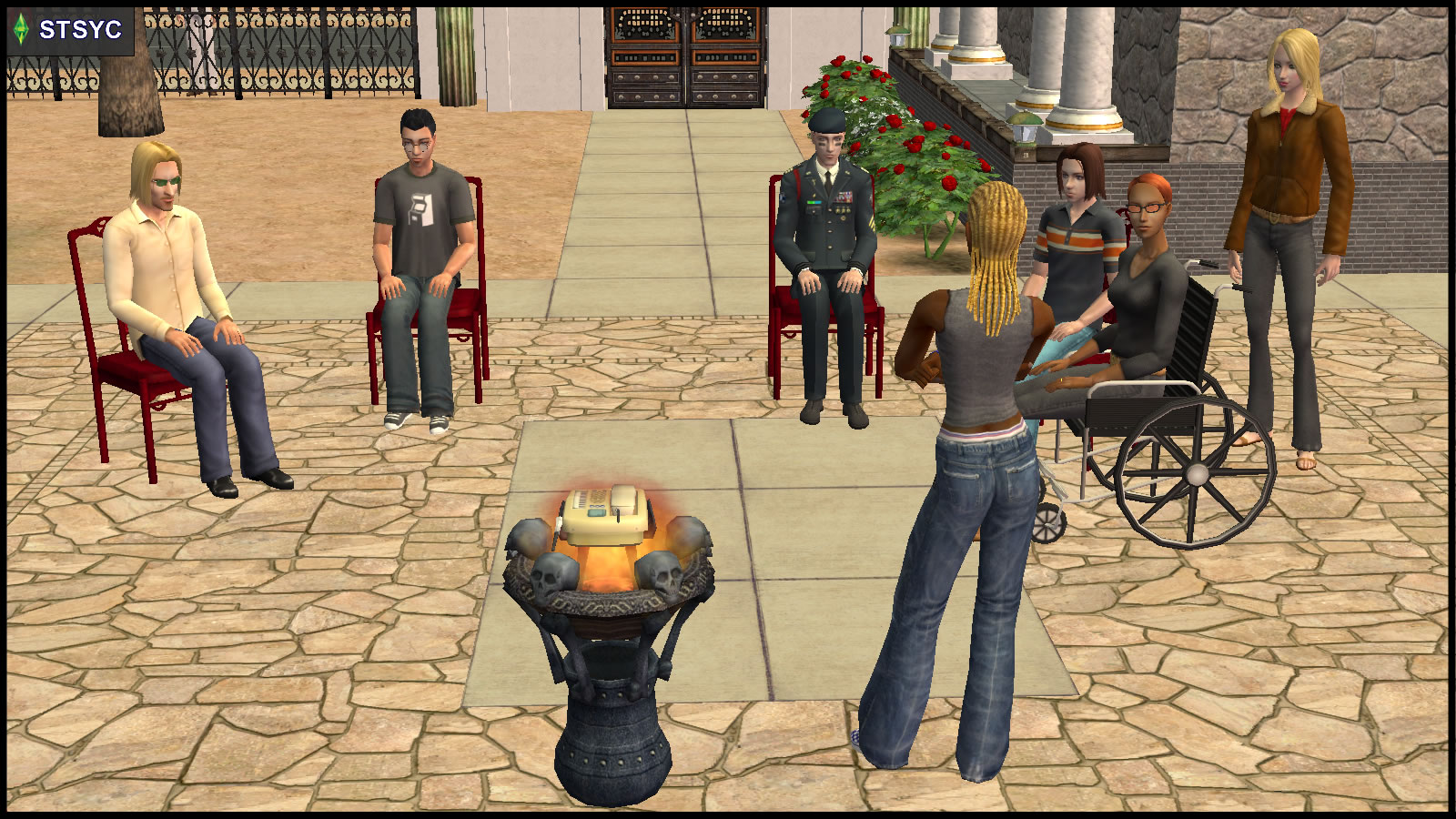 This phone will perform ONLY ONE full resurrection, before it disappears forever. One dead sim fully restored as they were in life, with no deficiencies. Which sim would you like to resurrect? Choose wisely.

Pascal and Vidcund Curious looked at each other. After a terrible eternity of anguish, grim understanding passed between the surviving brothers. Life would be more fun if their goofy brother returned. They would go back to nagging him about messes and occasional off-color jokes. They would also continue to enjoy Lazlo’s awesome cooking.

On the other hand, the grieving General Buzz Grunt had lost his teen son, the one whom he considered the most promising. Tank had died before having any chance to achieve anything much. Pascal and Vidcund shuddered at how it could have so easily been their teen nephew Johnny who had died instead, and understood General Grunt’s heartbreak.

This was probably the hardest decision made by the two brothers. Pascal broke the silence. “General, go get Tank back.” Vidcund nodded. Before Grunt could respond…

“Grunt, if your stupid son didn’t get involved, he wouldn’t have died!” Circe Beaker wailed. “Vidcund, YOU killed my husband, so your vote doesn’t count! I’m nothing without Loki… I need him back!”

“For what? To cause even more pain and suffering?” came Vidcund’s sharp retort.

“Better than innocent boy with his whole life ahead of him, than an evil psycho with a track record of domestic abuse!” Pascal agreed vehemently.

“My boy would make a better man than your husband ever was!” roared the General.

“Come on, Grunt, go ahead. You have our vote.” Vidcund encouraged.

“Oh no, you don’t.” Circe rushed forward towards the skull phone, but Ophelia Nigmos blocked her path.

With effort, Erin Beaker managed to restrain Circe and get her safely back on the wheelchair, but she was fidgeting uncontrollably.

The General picked up the receiver, and answered the skull phone’s question with the name of his favorite son. 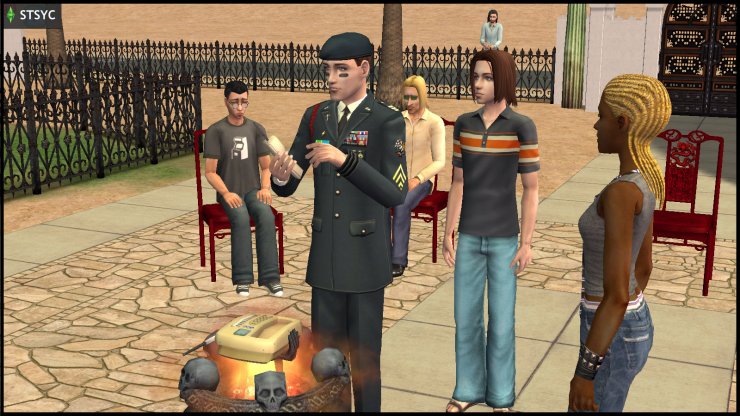 Almost immediately, a whiff of green smoke appeared. There stood Tank Grunt, dazed and confused, but otherwise healthy and unharmed.

“Tank!!” General Grunt cried, touching his son’s arms and face in an attempt to convince himself that Tank had returned in flesh and blood. “Are you OK, my son?”

“Yes Sir. Are we still in the battle? Did we win?” Tank sounded disoriented.

“Dude, we won, but you died, and now you’re back,” Ripp Grunt tried to summarize the situation, but Tank looked even more confused.

General Grunt quickly briefed Tank about the battle outcome, broke the news about Lyla’s second disappearance, and explained the one-choice scenario of the skull phone. 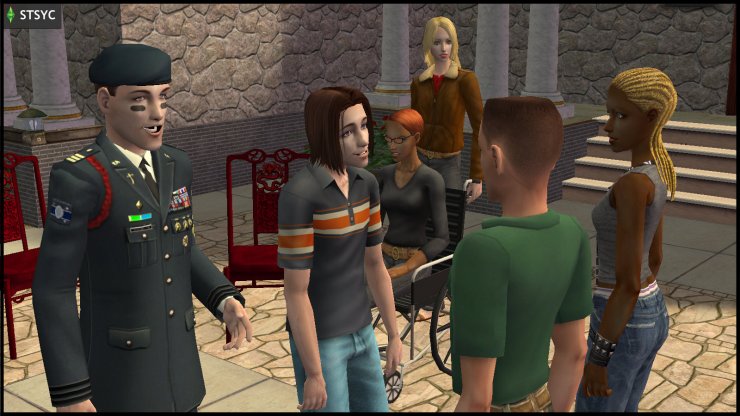 “So you should thank the Curiouses for graciously giving up their chance to get back their brother, so you can get a second chance,” instructed the General. “The Curiouses have done us Grunts a great favor today, so we Grunts should do our part, and stop all fighting with them. No more picking on Johnny Smith, you hear me?”

“Yes, no more fighting with your brothers either,” the General agreed.

Tank looked in amazement at the Curious brothers. “Your brother died, but you gave up your chance to get him back, by allowing my father to get me instead?”

“Be a good man — kind and honorable,” added Pascal.

“Thank you, Mr Curious and Mr Curious. We Grunts won’t forget this.” Tank turned to the General and Ripp. “I have a lot to think about. I need to lie down.”

Circe Beaker eventually recovered from her injuries, but she was never the same after Loki’s death. Beaker Castle felt unusually cold without Loki, and she had little confidence on her own to kidnap another test subject to be the target of her bitterness. 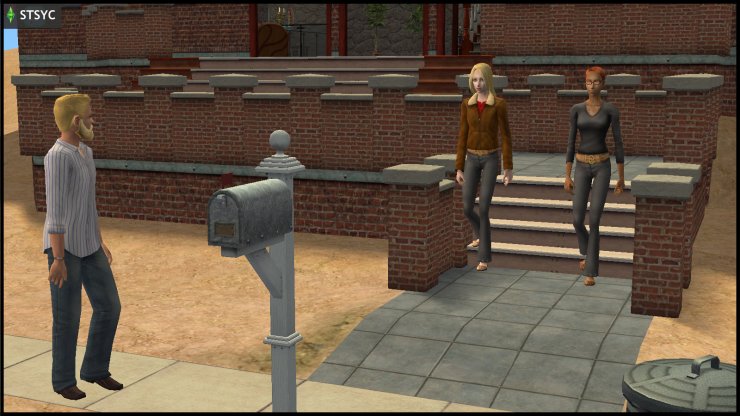 Loki’s sister, Erin Beaker, was willing to live with Circe for now, at least until she could finally get married. But Erin was firm in drawing the line against becoming Circe’s “accomplice” in the way Loki used to be.

During the third battle, Circe could not see exactly who kicked her away from General Grunt, but her subconscious mind kept telling her that it was Ajay Loner. Circe had never been comfortable with Ajay anyway, and was glad that Erin had broken up with that son of a boolprop. Erin never found out the truth about how Ajay betrayed Circe that fateful day.

Meanwhile, General Grunt was so pleased with Kristen Loste and Ajay Loner’s Team Grunt performance, that they both became regular visitors at the Grunt house. As Kristen and Ajay got to know each other better, they both acknowledged the possibility that they may become more than friends in future.

Ajay guessed that General Grunt would likely not speak too often about incidents involving the military man’s own weaknesses, but only as a context to instruct his sons to be kind to Ajay Loner.

Vidcund Curious’ faithful stargazing resulted in his very own alien baby, a daughter named Vivian. Despite being technically first cousins, Newton and Vivian Curious were raised as siblings.

Though Pascal and Vidcund were very pleased with their alien offspring, they could not help but wistfully wonder how it might be like if Lazlo had lived, so there may be three Curious Cousins instead, one for each of the three original Curious Brothers.

Meanwhile, Nervous Subject arrived in a new neighborhood. After Ophelia told him the identity of his father, Nervous decided to introduce himself as “Nick Grimm” to the new people he would meet. 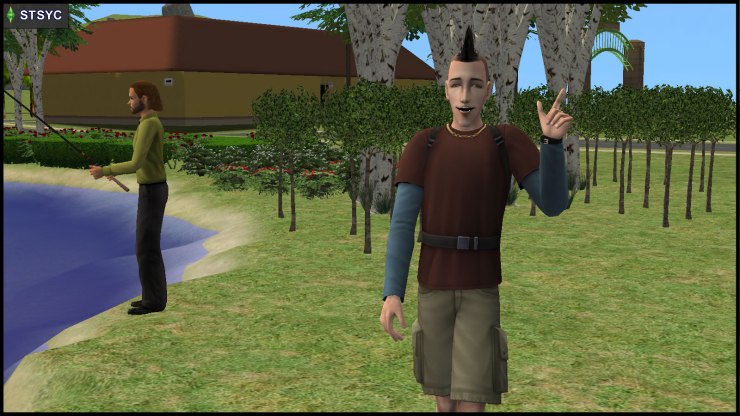 Nick took in the beautiful scenery of the park. The large pond and the dividing river beyond was a refreshing change from the desert of Strangetown.

“Hopefully, there’ll be a lot less feuding in this quiet neighborhood…” he whispered to himself.