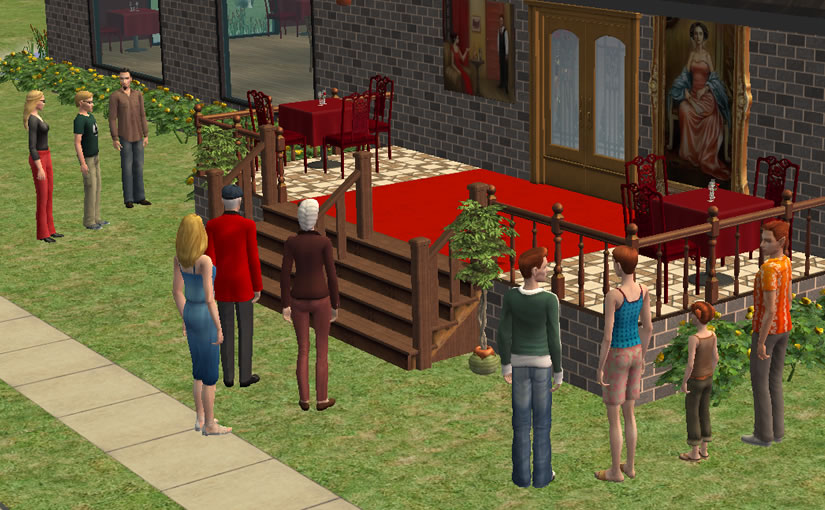 Charity Greenwood was a regular 13-year-old from Twinbrook, who lived a normal life like other teenage girls.

She had the fatal flaw of being careless with her personal information that she posted on the internet.

On her Q+ Profile Feed, Charity posted everything from her school result slips (to show off her good grades), to a photo of her family’s mansion, where the house number can be clearly seen.

Anyone who browses Charity’s Q+ profile could get a very clear picture of who she is… but not vice versa. 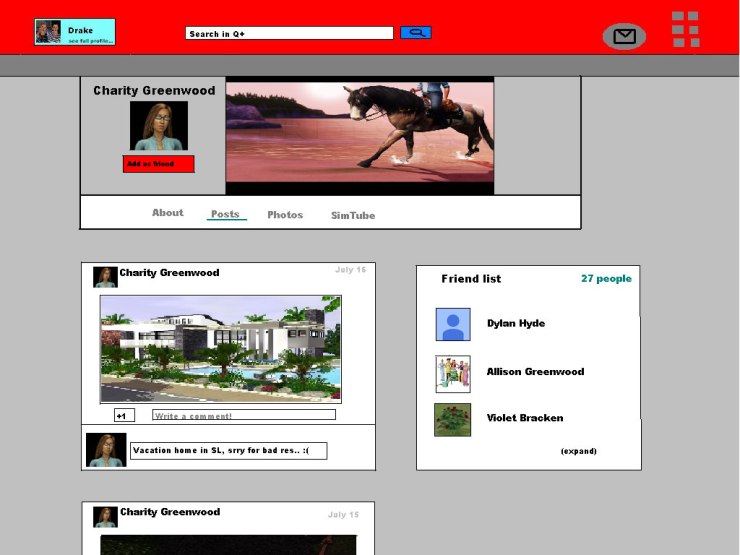 One day, Tybalt Capp was bored, and decided to browse random Q+ profiles.

He saw Charity Greenwood’s Q+ profile, which struck him as a gold mine of personal information.

Then Tybalt browsed the web for a photo of a random “hot teenage boy” around Charity’s age, and used it as the Q+ profile picture for “Drake Manson”, Tybalt’s new fake account.

Charity and “Drake” chatted online for about 2 weeks.

Tybalt learnt even more information, adding to the existing gold mine.

After that, Tybalt traveled to Twinbrook, where he convinced Charity’s school that he was her guardian. The school gave him complete access to Charity’s records.

Then Tybalt made an anonymous phone call to Charity Greenwood, and threatened to expose her private information. He did not mention “Drake Manson”, so Charity had no idea who the caller was, or how he found out the blackmail information.

Tybalt demanded to meet Charity at the alley near the Twinbrook Bridge at 10pm that night, to pay him §5000 to keep quiet.

He also warned her not to call the police, because he knows exactly where she lives, and will murder her in her sleep. 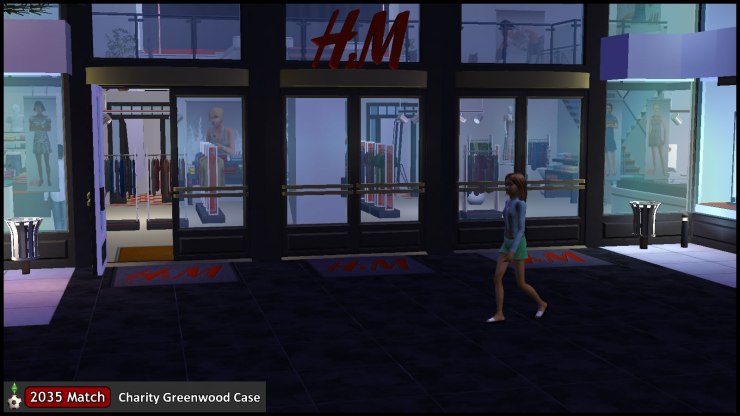 So that night, Charity gathered the money in bank notes, and made her way through town, to the agreed location.

After lulling Charity into a false sense of security… 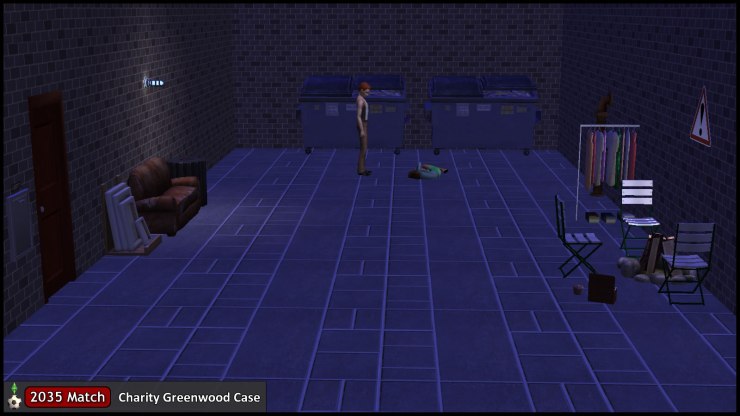 …Tybalt murdered her. He threw her body into the dumpster, and ran away with the money.

This became the “Charity Greenwood Case”.

The culprit was never caught.

Romeo and Juliette Monty were on a gondola ride along the Veronaville River, enjoying the good weather and smooth landscape.

It’s been a while since the young couple went for such a romantic getaway, since their firstborn arrived early in their marriage. Three-year-old Claudia is safe with her great-grandma Isabella at Monty Ranch, so the couple can focus on each other for the day… 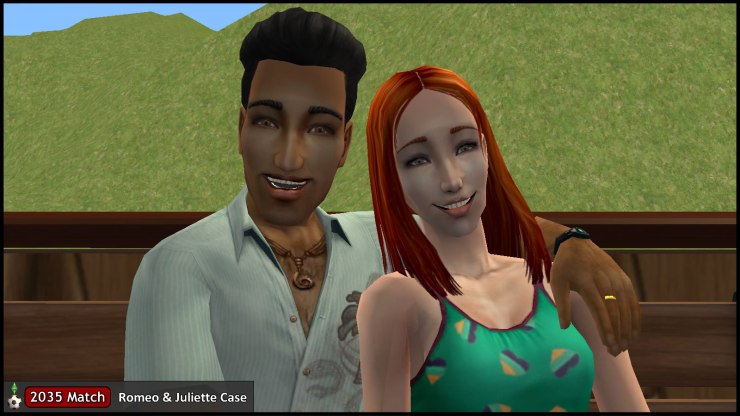 The peaceful atmosphere was suddenly pierced by a shout.

Romeo and Juliette turned around.
The gondola man was nowhere in sight.

Romeo looked out into the water.
There was the gondola man, dead, with a knife in his chest.

Before he could react, there was another scream, this time from his beloved Juliette.

Romeo turned around, and saw a man in a diving suit, approaching him swiftly.

Romeo thought the assailant’s red hair looked familiar, but soon felt a sharp pain in his chest. All went black, as he splashed into the water for the last time.

Juliette: What are you doing, Tybalt, you psycho?!

Tybalt: Saving you from that Monty scoundrel! 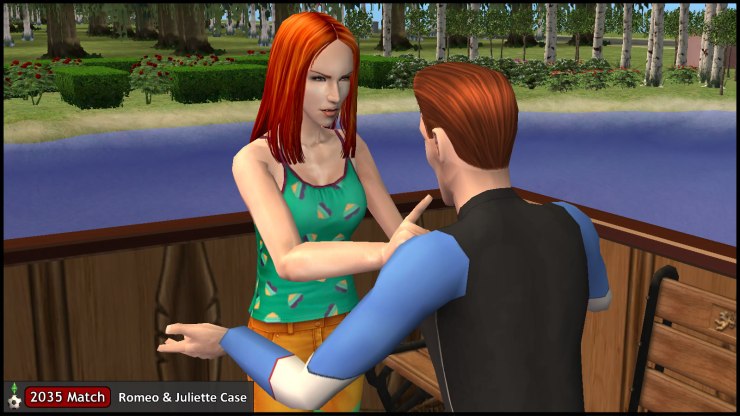 Tybalt: Be grateful, or I’ll kill you too!

Juliette: (indignantly) You’ll be in jail for the rest of your life! You can’t stab your sister!

Tybalt pulls out his last knife…

Tybalt: Well, Juliette… (Stabs her) I wasn’t put into jail… the last time round. Hahaha… 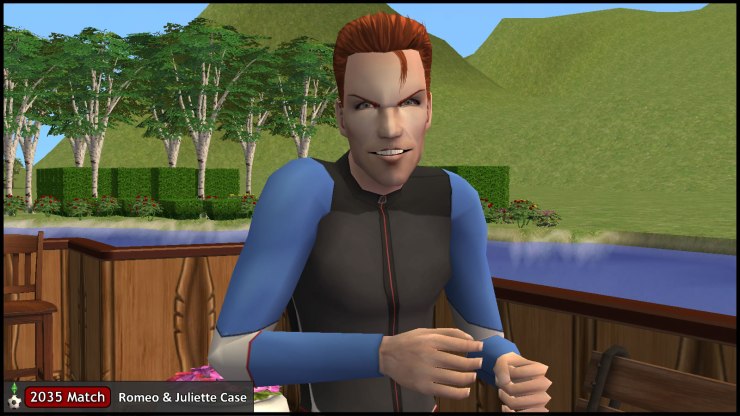 Claudia Monty was orphaned that day. Her great-grandmother, Isabella Monty, died shortly after the funeral of Romeo and Juliette.

Claudia’s closest living relative was her Uncle Mercutio, who was a bachelor in 2025.

The police found no fingerprints on the knives, as Tybalt was wearing (transparent) gloves.

During the time of the crime, Goneril Capp and another townie said they saw Tybalt at his house instead.

Nobody saw him make a sneaky escape from his window…

… and nobody saw him escape from the Veronaville River, dripping wet, into the forest, where he made a clean getaway… to sneak back into his house.

Even more chillingly, nobody knew that Tybalt found out about the gondola trip from browsing Romeo and Juliette’s Q+ public profiles.

How the Fringe did Tybalt Capp cover his tracks so well, to keep a good reputation among the Capps… to the extent of him being seen as a possible “role model”?

Goneril: So, Tybalt. Our Snowflake Day family dinner is next Saturday. Do we have any ideas yet? Budget, restaurant, people attending?

Tybalt: Yes, budget is as always. Same restaurant, and guests. I can count on: You, Albany, Ariel & Hal, Cornwall, Regan & Octavius and also Hermia, Puck & Kelly.

Goneril: Oh, why didn’t that boy tell me in advance?! Tybalt, can we change the date?

Tybalt: Sorry, we can’t. That’s the only slot they have for this weekend… (pretends to check his comm device) Sorry, Aunt Goneril, I need to go now, I have something else to attend to.

Tybalt returns home and starts his computer. He browses Kent Monty’s Q+ profile because he thinks it might be related to Hal’s trip.

Tybalt: Yeah! Here it is! I also wonder when little Octavius will start a Q+ profile, since he became 13 this year… Ah, little Hal is online now… I’ll invite him to a private Q+ chat…

Hal accepts the invite, and they start chatting.

Tybalt: hey, quick fire question. Is your field trip to ST secretly to convert you to Team STM??

Hal: No, when we have another match, I will still play for PVCS…

Tybalt: btw, is “kent monty” going for the trip too??

Hal: Why you ask?

Hal: Maybe he is, but why would you need to know, as he’s not coming to the dinner anyway.

Tybalt: ok. but if you do see him on the trip, you’ll be doing us capps a favor if he doesn’t come back to VV

Hal: What do you mean?

Tybalt: mix some nightshade into his favorite drink

Hal: Heheh… Like he’ll drink anything I give him…

Tybalt: do it secretly

By the time of the dinner party, Tybalt has yet to hear from Hal.

Ariel: Yes! He contacted me on Q+ this morning, and told me that he has a fun time!

Tybalt is angry. Is Hal ignoring him?

Tybalt: Excuse me? Since when are we FORCED TO?

Waiter: Well, since this year, waiters are allowed to do that. Because waiters don’t have that much of an income…

Tybalt: Go ride a bicycle, you idiot! This is a 4-star restaurant! Who do you think you are? You can have my fist! 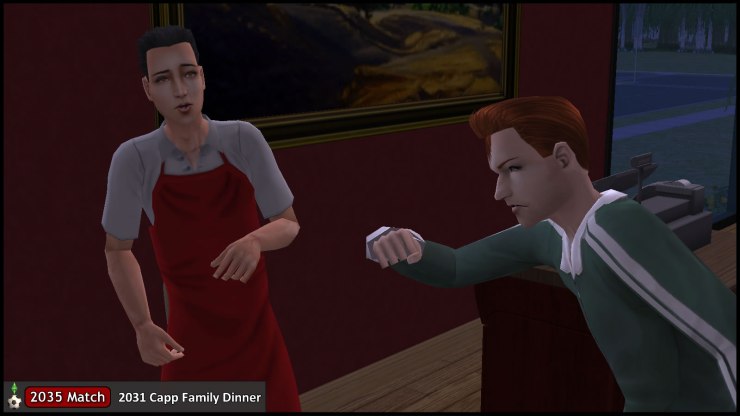 Ariel: From under which rock did you crawl out from?

Cornwall: (quietly) I think your role models should be Dad and Mom. 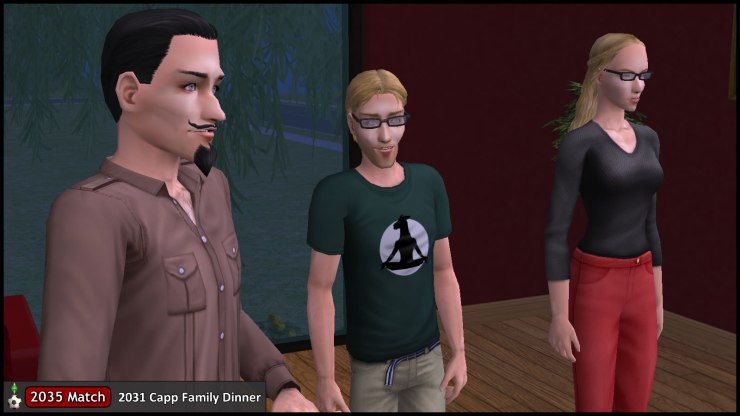 Tybalt was fined §10,000 to pay for the waiter’s full hospital bill, as the waiter needed an operation to fix his cheek and nose.

Tybalt’s house, the next morning…

And what’s this? New Q+ private message? From who?
Oh, from Hal… What is he saying?

“Sorry Tybalt, I really wanted to, but I hadn’t got the chance…”

Tybalt: (thinking) Shut your sarcastic mouth… I should probably hack his account… Nah, Aunt Goneril won’t forgive me for that…

Shortcut to this page: http://is.gd/stmpvcs9